The general aim of the project was ensuring effective participation in social life as healthy individuals of children and young people in Turkey by supporting their mental and physical health, strengthening and developing socialization. In the scope of the Face to Face Project, studies were made at 4 pilot schools in Fatih district with support of Ministry of Youth and Sports and a research was conducted with a total of 4533 students. 100 young people with 15-18 years of age in Internet addiction risk group and their families were reached through specially prepared psycho-education modals while the total of 4533 young people were reached through trainings where 3 short films taken in the scope of this project were screened. Aim of the project was to raise awareness among young people with 15-18 years of age, their parents, teachers and school administrators about Internet addiction. The project envisaged ensuring effective Internet usage by young people throughout their education and positively effecting the next generation by training parents. In addition, young people in target schools were directed towards social and artistic activities such as chess and acting in order to gain social skills.

In the scope of ‘Face to Face Continued’ project that was the second stage of the project, 54.605 students attending junior high schools in Fatih, Eyüp, and Beyoğlu districts, 2.700 teachers and administrators, and about 100.000 regular people were reached with parent and public seminars. Also, 40 psychologists and 30 voluntary psychology students trained with psychologists working in the project were developed in professional awareness, skills, and capacities. In the second stage of the project, the cartoon titled “Yağmur and Toprak are Online” was published in 10.000 copies and with about 90.000 views in Ministry of National Educaton’s Education and Informatics Network, it reached 100.000 young people. 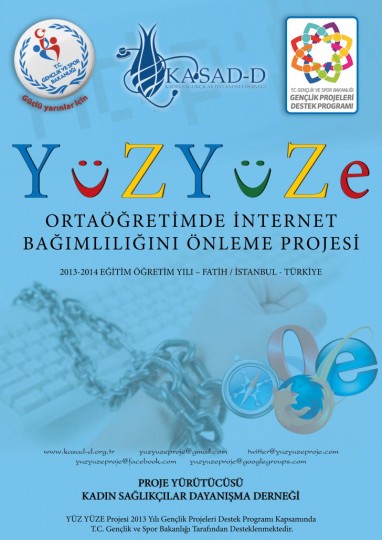